Lucia: These are your first designs for office furniture.
Is it essentially different from domestic furniture?
Ronan: They are two different things and therefore present different problems. But we actually do our best work when we apply ourselves to things that we initially know little about. If you don't have any f
>>
ixed ideas about a particular topic, you can approach it entirely free from preconceptions. We can do something new simply because our view is not inhibited by established patterns.

L: This design is conceived for people who want to work together. You both work together, so did your collaboration serve as a model?
R: Design requires the ability to analyze a situation and the partners with whom one is working. We find it particularly inspiring to span the gap between different disciplines. And Erwan and I also regard design very clearly as a matter of teamwork. The interesting thing about our working method is that we take up contrary positions at the outset of the design process. We often disagree and clash with one another for a considerable period of time, so that when an object leaves our workshop, it has already survived a number of battles.
Erwan: Besides, our workshop is like a two-way street; no object belongs to one person or the other. This is the primary concept that we wanted to bring into this project. We said to ourselves âWe are going to make something spacious, with generous proportions, something with larger dimensions than an object that belongs to me alone, where I store my own stuffâ. The principle of working together is secondary to the principle that nothing belongs to any single individual.

L: Where did you get the idea for the table? A âcommon toolâ for âcommunal workâ?
R: The initial idea was to regard the hundred square metres of office space in which about fifteen people work as a landscape, and to provide a living setting for these people â because one also âlivesâ in one's office. âCommunal workâ means that approximately fifteen people live together in
a room. They must be able to discuss things together; there must be proximity between colleagues but one also needs quietness in order to concentrate, as well as the opportunity to relax. In order to cover such a spectrum of diverse situations, one needs an object that unites all of these qualities. And we saw that in the table.
E: First we worked on the problem of the large open space. And then, metre by metre, we made the small decisions.

L: The table strikes me as a very old patent. Our history, our memories are populated by many tables...
E: Yes. Design often stands for new ideas. What we are doing here is not exactly a new idea; I would be more inclined to say that we have transplanted an idea. Our design actually has more in common with a large table that might be found on a farm or somewhere in the countryside. It is an image that is implanted in the memory: a large table at which someone is sitting and reading the newspaper, while someone else in front of him is peeling potatoes, and a third person at the other end is mending his watch.
R: Our grandparents lived on a farm where the kitchen table was the central focus of the house. This table was the place where people ate, where they talked, and I'm sure my father did his homework there. It was just a surface. Today you have to think about where to situate the electric hook-ups, and how to divide up the surface, because when fifteen people are sitting at a table, everyone needs a little space of their own.

L: You said that one also lives in the office. We frequently hear of the increasing intermingling of leisure time and work; in this context the question arises as to whether design is contributing to this development.
R: In our case, our private life and work are not really distinct. Our workshop is a room that must be comfortable, simply because we spend so much time there. For this reason, we have carefully examined the archetypal elements of the office, and attempted to transfer situations onto them that would normally be regarded in a domestic context. For example, the objects are covered with fabric because of its visual, textural and acoustic qualities. The next problem was to create a homogenous landscape that is also complex. Think about the fact that you might have an old sofa from your student days, and next to it, if you've acquired a little more money in the meantime, a wonderful Vitra chair, stereo equipment by Sony and, to crown it all,
a wall full of old books from the flea market... The real-life diversity of such an interior landscape is very important
to us. For this reason, the landscape that we have designed for Vitra consists of materials, colours and shapes that correspond to each other, but simultaneously offer marked diversity. One finds textiles here and metal there, plastic
in between, small details next to large surfaces, et cetera.

L: One has the impression that you had a good time designing this diversity; in fact it is often stated that your work has something âplayfulâ about it. How do you view this?
R: Our office is not âplayfulâ in the literal sense of the word, but its flexibility gives it a certain suppleness and simplicity; it leaves room for movement. If someone was looking for an analogy, a film by Jacques Tati might be appropriate. But in spite of everything, an office is an office, not a beach or a cafÃ©. An office is a living space in which people sometimes like to sit together and talk, but also need to be able to work at a high level of concentration. It is a little bit like a restaurant: in a restaurant you can celebrate, but on another occasion you might find yourself in the position of telling someone that you are going to leave them. The things that we make don't satisfy a playful impulse like fireworks do, but belong more in the category of âtoolsâ â tools that provide enjoyment.
E: It was important for us to create an open system. As we work, we often imagine that we are creating a palette; but the palette is reconfigured by the people who will later use it. I wouldn't call this âplayfulâ design, but it gives people the opportunity to adapt to the room in which they find themselves.

L: Then spaciousness is not just a question of surface area, but has something to do with freedom?
E: Yes. Sometimes people talk about creating their own landscape. Our goal is not to create a perfect work environment in which the telephone has a specific, predefined place. Some people like boxes to put everything in; others like a lot of space so that they can leave their things lying around; and others like to have everything within reach. Our job is to make all of this possible and especially not to restrict anyone with a predefined framework.
R: A life that is the epitome of organization, because some ingenious designer thought of absolutely every contingency when he was making an object, doesnât seem that appealing.

L: Are your projects designed for the present â in the sense that you take the current status of things as a starting point, see what is missing and search for new solutions?
Or is it more like a vision for the future, a prescription for what might come?
E: The problem does not lie in the future. Unwritten rules prevent me from having something to eat at my desk, or from having a place near my desk where I can read a book. Our design offers the potential to support a way of life that already exists elsewhere.
R: I recently read something that Duchamp wrote a long time ago. He said, âThings used to be better, because there were no solutions and therefore no problems.â Now there are many solutions and so we are surrounded by problems. It is often said that progress means the constant development of new solutions, applications and functions. We have taken the contrary position of reaching a point with our office design where there is a surplus of options. For example: if you have a coffee cup, the cup has a particular place; you have a vase, the vase has a place; a pencil, the pencil has a place. Everything is divided up into little squares: a different function has been created for every possible activity. Nowadays, few inventions are truly inventive. The way we see it, the definitive question posed by an office is this: âWhat does one really require?â And above all: âCan't anyone offer a partly blank page, so that when a person wants to set down the coffee cup, there is simply a place to put it? And if someone wants to have a vase, he goes out and buys a vase and puts it on the table.â

L: That gives your designs an almost magical aura of simplicity. The table is a very simple object that also distinguishes itself by what is missing â there is nothing superfluous about it â and yet one can use it in an endless variety of ways.
R: Simplicity and humour are prerequisites for the emergence of a natural whole. So that every little change that a user makes in the office, every idea that he wants to realize, is completely natural. So, when he wants to move something from one place to another, he only has to think about how to achieve this in purely physical terms, and doesn't have to ponder the social/psychological question: âHow can I explain to everybody else that I just felt like doing it?â Humour and simplicity are prerequisites for the emergence of something like friendship. I think that when people come into physical contact with this system, they will be compelled to move things around, and they won't feel inhibited. On the contrary, they'll feel as though the table is thoroughly satisfied, as though it was just waiting for something to happen. 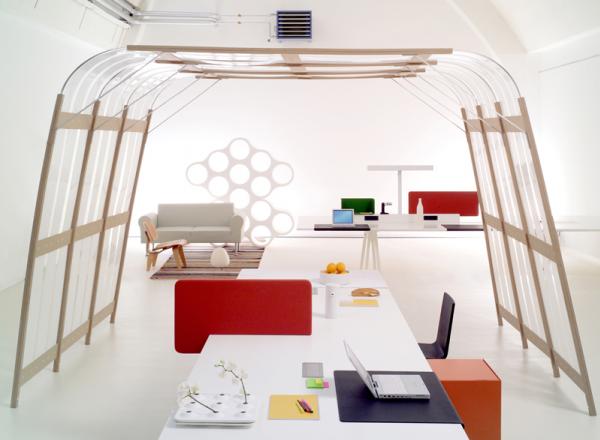 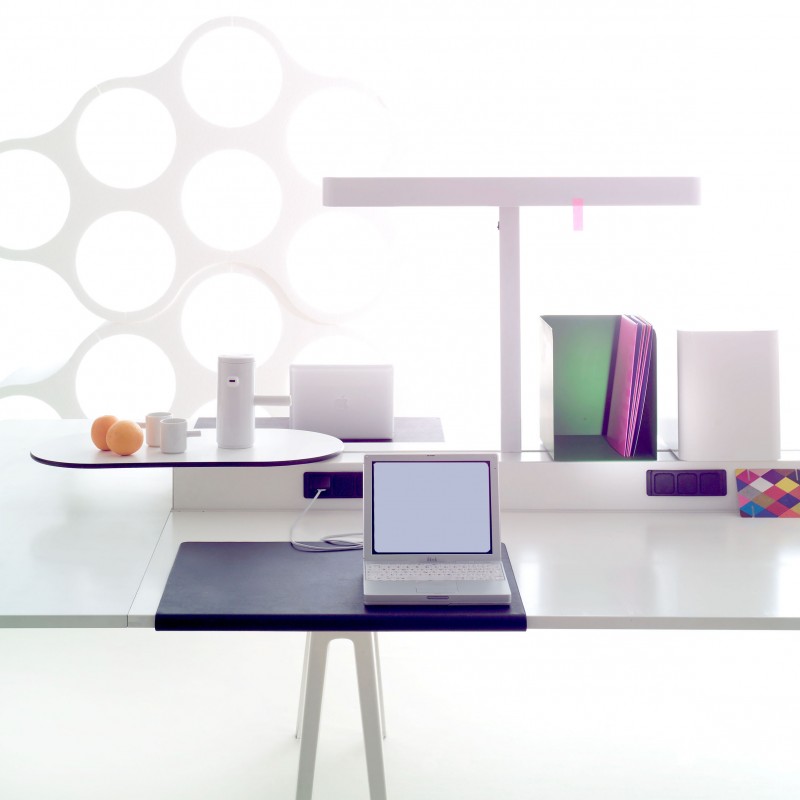